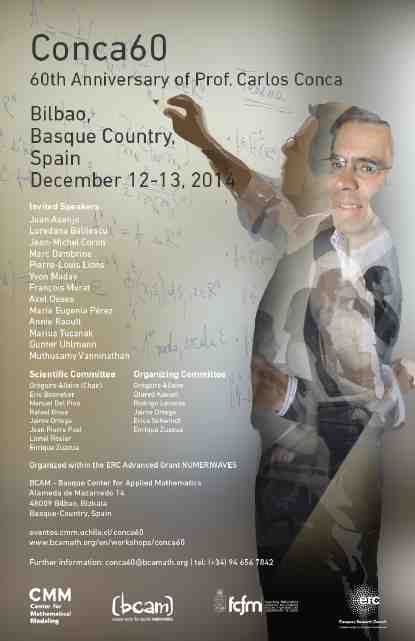 This Congress was celebrated

in honor of Professor Carlos Conca

in his 60th anniversary.

Dear friends, good morning to you all.
Your presence at this reception is a great and extraordinary honor.

I’d like to begin by thanking all of you for attending this reception, and for the warm words of the speakers who came before me, in particular those of professors Zuazua, Allaire, and Ortega who gave a very flattering portrayal of my contribution to science. Since they are all the three mathematicians of great prestige, and for whom I have enormous admiration, their words are particularly meaningful to me. My warmest thanks go also to Ms De Madariaga Ibarra.

Last year, at a conference in Shanghai, China, organized by the University of Fudan, Luc Tartar, an eminent French mathematician, posed the question: “Why was Albert Einstein considered a genius?” And not just among physicists and scientists in general, but by everyone, in all parts of the world. Let us not forget that TIME magazine named him “Person of the Twentieth Century” and that its final front cover in 1999 was dedicated to him.

There can be no doubt that Einstein’s scientific achievements are some of the most important and far reaching that the Human Mind has achieved. Yet in Luc’s open-ended question I see something that leads us beyond rational abilities. It allows us to connect with one of the fundamental characteristics of Consciousness, to understand the prolific and prodigious interaction that exists between cognition and emotion, the root of all our behaviour.

Einstein was extremely accurate in understanding their fellow men. He was able to grasp the motivations of human beings, their hopes and their sufferings. He was very successful, but above all he was of value to society and very early on he came to live his life for others. In this way, he was exceptional in his community. If he were to have been a mathematician, we would not have been so surprised, since
“All mathematicians are trained to serve, not to dominate”

There are no mathematicians who are bad teachers. Moreover, we have the gift of teaching and we invest time and effort in cultivating this talent. The creative expression of the mathematician combines a certain duality: Like artists we seek to recreate new worlds, beauty is our guide. Yet, with the mind of an explorer, we also attempt to build a better understanding of the world that surrounds us.

Experience shows us, however, that the work of the mathematician only takes on true meaning at the moment that it flows through the learning-teaching process, and becomes useful in the mind of the students and disciples, in the mind “des élèves”, as my mentor Jean-Pierre Puel would say. Teaching is an art, there are no two classes nor two courses that are the same. The greatest happiness comes from giving classes to freshmen.

Nothing makes us happier than scholarly adventures to the limits of the truth, with the sole aim of unravelling some unexplored detail of a concept, a calculation or a theorem. This is the happiness that comes with each revelation. In the mythical 55-65 hallway of Paris VI Lab, my master François Murat used to exclaim aloud the famous French expression “clairette lumineuse” to capture this magical moment.

I would dare to suggest that this is Mathematics’ greatest contribution to Mankind, to have stimulated the development of psychological forces in the Mind that ask for irrefutable and rigorous explanations. One of the distinguished mathematicians of our time, the Frenchman Jacques Louis Lions, shed light on this area with his work: He brought us close to the limits of mathematical modelling, leaving us the challenge of making “the invisible visible”.

The greatest satisfaction of a life dedicated to Mathematics is the people with whom one has shared ideas and stimulating debate. I can’t mention each one of you by name, nor were all able to be present today, but know that I am very grateful to all those with whom I’ve had the privilege of collaborating and sharing my academic life: learning, teaching and creating new Mathematics.

Reaching the age of 60 calls up a number of feelings, including, of course, those that come from looking back over a life lived. The meaning of one’s achievements in life can be summed up in one very simple observation, which is that they depended on luck. It was my luck to be born in Chile, a country that, in the XIX Century was affectionately nicknamed the Basque Republic of Latin America, Euskal Errepublika Latinoamerikako.

I don’t claim to embody the hopes of those talented Basques, with their generous and illuminating spirits, who arrived in my far-off land centuries ago. Those whose dreams of forming a free Republic through knowledge and education could be symbolised by Don Andrés Antonio de Gorbea; the mathematician from Álava. These men and women truly took part in the events that shaped the history of the Basque country and Chile.

It was a Chile where was all to be done and, even today, the motivation is high captivating. Gorbea lead the Chilean Academy of Engineers, he cemented and modernized the teaching of Mathematics, and in 1843 he founded the School of Physical Sciences and Mathematics of Universidad de Chile, which is the alma mater of Chilean Engineering. Everything was placed in our hands for us to honor, expand and transmit to the generations that follow us.

How could I stand before you, decorated with the honor that you have granted me, if I didn’t feel proud to have taken some small part in this mission, which crystallized into the development of Mathematics in my country?.

Thus far, I have mainly touched upon issues related to our professional practices. But I believe that this is not the core of life, being our human qualities and relationships the most important and determining factors. It is what you are about.

It has now been over a century since my grandparents and ancestors left different towns in Europe, searching for a better future. They came to South America, arriving in Chile. I had the privilege of being able to return to Europe and I felt as though my family had never left: this must surely make you proud of the strength of this ability to transmit and share such a cultural treasure.

When I look back at the things I regret or that caused me joy, I realize that most of my experiences are related to the people who surround me. I have been fortunate to have my parents, my wife and my daughter, who are both here somewhere in the audience, as well as my close relatives and friends, many of whom are dedicated to academia around the globe.

Because, at the end of the road, what really counts are the feelings you share with those who are close to you.

Thank you to all of you. Thank you very much.