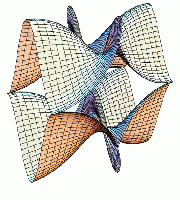 The aim of the conference is the exchange of ideas, methods and problems between various disciplines of applied mathematics. Non mathematicians using mathematics as a tool are also encouraged to take part in the conference. Each conference in the series had a strong international flavor. The first two were held in Dubrovnik in 1999 (ApplMath99), 2001 (AMSC2001), and the third, fourth and fifth on Brijuni island in 2003, 2005 and 2007. In 2009 (ApplMath09) the conference was held in Zadar, in 2011 (ApplMath11) in Trogir, and in 2013 (ApplMath13) in Šibenik. Each instance had a special topic, see the related web sites. Proceedings have been published by Dept. of Mathematics, Univ. of Zagreb (ApplMath99), by Kluwer publishers (AMSC2001), by Springer (ApplMath03), Annali dell’Università di Ferrara (ApplMath05, ApplMath07), and accepted papers from ApplMath09, ApplMath11, ApplMath13 appeared in Mathematical Communications.