Abstract:
In the continued pursuit of knowledge regarding the origins of our solar system, scientists have been looking toward the minor bodies — asteroids and comets. These small yet abundant objects are distributed throughout the solar system and are pristine representatives of the history of our planet and the universe. Moreover, it has been recently suggested that missions to near Earth asteroids could be the key stepping stones for interplanetary human flight. The opportunity for research is huge, and potentially affordable, when considering those near Earth asteroids that come close to home. A main objective of this presentation is to use tools from optimal control theory to assess the feasibility of space missions to a new population of near Earth asteroids which temporarily orbit Earth, called temporarily captured orbiter. Rendezvous missions to a large random sample from a database of over 16,000 simulated temporarily captured orbiters have been designed using an indirect method based on the maximum principle. The main contribution of this work present here is to overcome the difficulty in initializing the algorithm with the construction of the so-called cloud of extremals.

J.A. Bárcena-Petisco, Kevin Le Balc’H. Local null controllability of the penalized Boussinesq system with a reduced number of controls (2021) Abstract. In this paper we consider…

Umberto Biccari, Mahamadi Warma, Enrique Zuazua. Control and Numerical approximation of Fractional Diffusion Equations (2021) Abstract. The aim of this work is to give a broad…

On June 28th. to July 3rd., our Head Enrique Zuazua will talk on “Control, Numerics and Machine Learning” at the Online CIMPA School (OCA’21): Optimal…

Last month, on May 14th, our team member Borjan Geshkovski at CCM – Chair of Computational Mathematics, Deusto Foundation – University of Deusto, defended his…

On Wednesday June 9, our Head Enrique Zuazua will talk about “Networks, Waves and Control”, an Analysis Seminar of the Department “R. Caccioppoli” at Università…

On May 11th, our Head Enrique Zuazua talked about “Neural Differential Equations, Control and Machine Learning” at StudOn AG “Mathematics and Deep Learning”. Abstract. We… 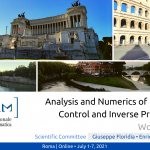 Sapienza Università di Roma - “G. Castelnuovo” Mathematics Dept. (Italy)
WE USE COOKIES ON THIS SITE TO ENHANCE USER EXPERIENCE. We also use analytics. By navigating any page you are giving your consent for us to set cookies.    more information
Privacidad