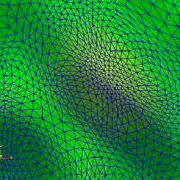 Abstract: The large time decay rates of a transmission problem coupling heat and wave equations on a planar network is discussed.
When all edges evolve according to the heat equation, the uniform exponential decay holds. By the contrary, we show the lack of uniform stability, based on a Geometric Optics high frequency asymptotic expansion, whenever the network involves at least one wave equation.
The (slow) decay rate of this system is further discussed for star-shaped networks. When only one wave equation is present in the network, by the frequency domain approach together with multipliers, we derive a sharp polynomial decay rate. When the network involves more than one wave equation, a weakened observability estimate is obtained, based on which, polynomial and logarithmic decay rates are deduced for smooth initial conditions under certain irrationality conditions on the lengths of the strings entering in the network. These decay rates are intrinsically determined by the wave equations entering in the system and are independent on the heat equations.