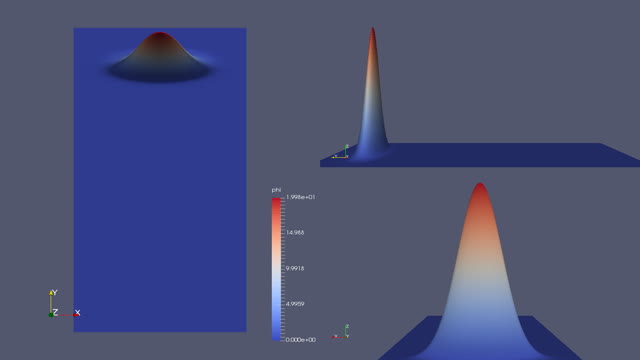 We are interested in the numerical discretization of the Kolmogorov equation [12] <p><span class="math display">\[\label{kolmo} \left\{ \begin{array}{lll} \partial_t f - \mu \partial_{xx} f - v(x) \partial_y f =0, & (x,y)\in\R^2, t>0,\\ f(x,y,0) =f_0(x,y), & (x,y)\in\R^2 \end{array} \right.\]</span></p> where $\mu>0$ is a diffusive function and $v$ a potential function.
This is one example of degenerate advection-diffusion equations which have the property of hypo-ellipticity (see for instance, [6, 13, 14]), ensuring the $C^\infty$ regularity of solutions for $t>0$ ([6]).
In the present case, the generator of the semigroup is constituted by the superposition of operators $\mu \partial_{xx}$ and $ v(x) \partial_y $. Despite the presence of a first order term, that could lead to transport phenomena and, consequently, to the lack of smoothing, the regularizing effect is ensured by the fact that the commutator of these two operators is non-trivial, allowing to gain regularity in the variable $y$. A full characterization of hypo-ellipticity can be found in [6].

Solutions of (1) experience also decay properties as $t\to \infty$. This is also a manifestation of hypo-coercivity (in the sense developed by Villani [13], [14]) as a byproduct of the hidden interaction of the two operators entering in the generator of the semigroup.

These decay properties are of anisotropic nature and of a different rate in the $x$ and $y$-directions. Indeed, in the $x$-direction, as in the classical heat equation, we observe a decay rate of the order of $t^{-1/2}$, while, in the $y$-variable, the decay is of order $t^{-3/2}$.

The obtention of these decay properties by energy methods has been a challenging topic of particular interest when dealing with more general convection-diffusion models that do not allow the explicit computation of the kernel. In this effort, the asymptotic behavior of Kolmogorov equation and several other relevant kinetic models was investigated intensively through the concept and techniques of hypo-coercivity, which allow to make explicit the hidden diffusivity and dissipativity of the involved operators (see [13], [14] and the previous references therein).

The literature on the asymptotic behaviour of models related with Kolmogorov equation is huge. We refer for instance to [8], [9], [2] for earlier works, and to [4], [5] for more recent approaches. Roughly speaking, it is by now well known that, constructing well-adapted Lyapunov functionals through variations of the natural energy of the system, one can make the dissipativity properties of the semigroup emerge and then obtain the sharp decay rates. These techniques have been developed also in other contexts such as partially dissipative hyperbolic systems (see [1]).

In [10] Porretta and Zuazua introduces a numerical scheme that preserves this hypo-coercivity property at the numerical level, uniformly on the mesh-size parameters. The issue is relevant from a computational point of view since, as it has been observed in a number of contexts (wave propagation, dispersivity of Schrödinger equations, conservation laws, etc. [15], [7]), the convergence property in the classical sense of numerical analysis (a property that concerns finite-time horizons) is not sufficient to ensure the asymptotic behavior of the PDE solutions to be captured correctly. The fact that the numerical approximation schemes preserve the decay properties of continuous solutions can be considered as a manifestation of the property of numerical hypo-coercivity.

In [3] Foster et al introduces a numerical scheme which preserves the long time behavior of solutions to the Kolmogorov equation. The method presented is based on a self-similar change of variables technique to transform the Kolmogorov equation into a new form, such that the problem of designing structure preserving schemes, for the original equation, amounts to building a standard scheme for the transformed equation. We also present an analysis for the operator splitting technique for the self-similar method and numerical results for the described scheme.

Here, instead of, we investigate this behavior using the characteristics-Galerkin finite element method (trough Freefem++ [11]) and in particular, we confront the results to those obtained in [3].

2 Description of the numerical scheme

At the numerical level, we employ a finite element method based on characteristics-Galerkin technique, and for the sake of simplicity and ease, we use the Freefem ++ software ([11]). As described above, solution of Equation (1) does not only diffuses in the direction of x, by the effect of the diffusion operator $\partial_{xx} f$, but it is also diffuses in the direction of $y$, due to the transport equation $\partial_t f – v(x) \partial_y f$. We will treat both effects, transport and diffusion separately, using the characteristics method, that we recall hereafter, for the equation $\partial_t f – v(x) \partial_y f$ and linear or quadratic finite element to discretise the diffusion term.

Therefore, denoting $\tau_h$ a partition of $\Omega$ by triangles and $V_h$ the $P_k$-finite element space (of degree $k$),
the weak discrete form of the problem (8) is

The Freefem++ script corresponding to the problem may as follows