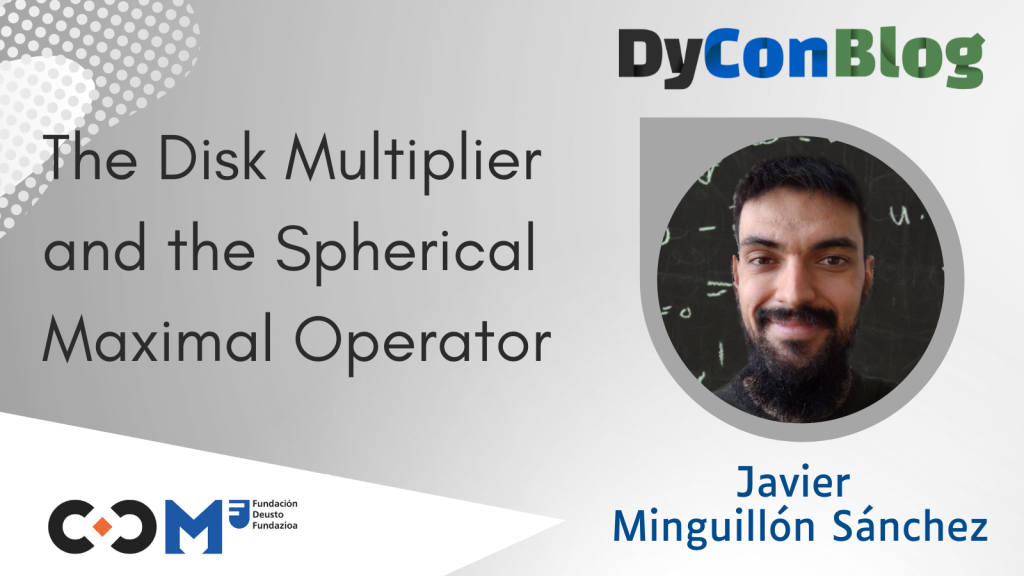 We use this same notation for the extension that the Fourier transform operator admits. We refer to the extension from L^1(\R^d)\cap L^2 (\R^d) to the whole of L^2 (\R^d), which is made possible by means of the density of L^1\cap L^2 within L^2 and Plancherel’s identity.

The above multiplier operator is particularly well behaved and we only need to rely on properties of the translation of functions to see it. One such property is that, for any f\in L^2(\R^d)\cap L^p(\R^d), we have \|T_{m_\tau}f\|_p = \|f\|_p .

The reader would be right to think that the above is a rather complicated way of proving the existence of the obvious extension of T_{m_\tau} . We chose this way because it illustrates the general method of taking a bounded operator on a dense subset and extending the operator to the whole set.

Another natural multiplier operator is one that gets rid of higher frequencies using an indicator function on the unit ball of the frequency domain. Or a ball of an arbitrary radius for that matter. This one is known as the disk multiplier operator.

Unfortunately, the above is not always finite.

From the above three facts, we know it suffices to construct the counterexample for D_1 in the L^p -norm for p>2 in dimension d=2.

The Disk Operator is Unbounded

The construction of the counterexemple that we outline here follows the one in [12] and is based in the following two lemmas.

These lemmas are formulated in terms of rectangles, that we use to build the functions that provide a counterexample to the boundedness of the disk operator. Given a rectangle R, we denote by \tilde R a translation of two times the length of the rectangle. Then we perform a reduction to one third of the width (so that the short sides of \tilde R and R^* have the same midpoints). This construction can be seen in the following Figure. 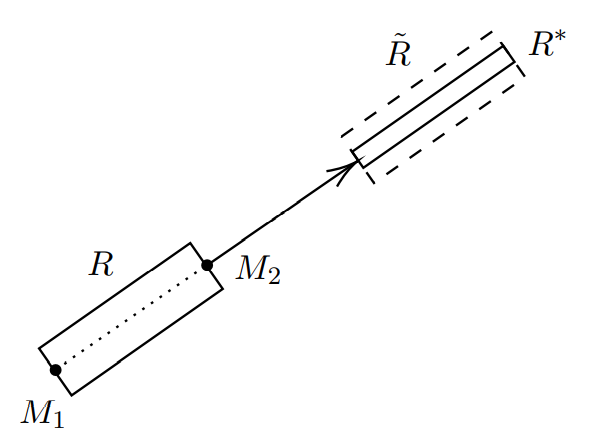 Figure. The rectangle R^* to scale. The midpoints M_1,M_2 determine the direction of the translation

The first lemma gives us functions f_R which act as building blocks.

The second lemma affirms there is a way to pack narrow enough rectangles R with a high degree of overlap while the modified rectangles R^* are all disjoint. It exploits the properties of Besicovitch sets.

The spherical means opearator is a rather well behaved operator that calculates the mean of a function on a sphere of radius t>0 centered around a point x in the domain of the function. One would expect these means to approach the value of the function at x as t\to 0 for continuous functions. And there is pointwise convergence in that case.
But the good behaviour is even broader.
We are talking convergence in L^p norm and almost everywhere for functions merely in L^p (with a condition on p that depends on the dimension d ). The latter convergence is related to Stein’s spherical maximal operator.

in L^p norm for all f\in L^p. In fact, through the boundedness of the associated maximal operator, one can find out that
S_t\xrightarrow[t\to 0]{}f, (15)

As it turns out, this non-linear operator is bounded.

The Bound for the Spherical Maximal Operator

The boundedness of the spherical maximal operator in the case d>2 can be proven as a corollary of the following theorem due to Rubio de Francia [7].

The decay of \widehat{d\sigma} can be proven in the following way. First, we use the invariance by orthogonal transformations that d\sigma satisfies and notice that it suffices to prove the bound for
\widehat{d\sigma}(\lambda e_d) = \int_{S^{d-1}} e^{-2\pi i \lambda x_d} d\sigma(x), (19)

Then, we would only need to prove the following proposition, that arises from the oscillatory nature of the trigonometric functions.

In order to bound the above sum we use the following three lemmas. The operators can actually be extended so that the lemmas need not be stated merely for functions in \mathscr S.

where the constants are positive and the sum is finite if and only if p>\frac{2a+1}{2a}.

Which allows us to use Marcinkiewicz’s interpolation theorem yet again (over the last two equations this time) to obtain a bound for the M_j, j\in \mathbb N , for all \frac{2a+1}{2a} \lt p \lt \infty.

II [B_1^-] Short-course: Control and Machine Learning by E. Zuazua