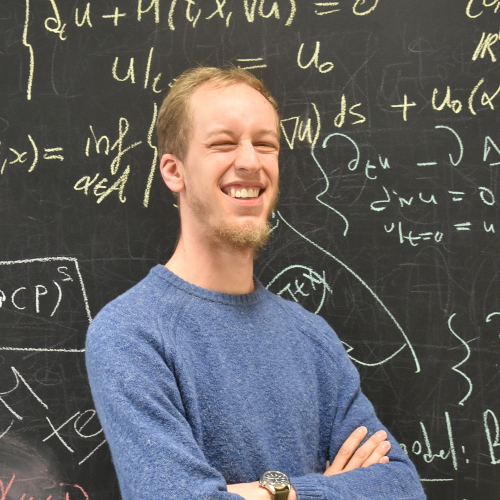 Dario Pighin is a PhD Student at Universidad Autónoma de Madrid (UAM). He earned both the Bachelor’s Degree and the Master’s Degree in Mathematics at the University of Rome Tor Vergata (Rome 2). Currently, he is studying for his PhD in Control Theory, under the joint supervision of professor Enrique Zuazua.

“I have worked on Controllability of Partial Differential Equations under constraints. Currently, my research is focused on the Turnpike Property in Optimal Control Theory.”

Description:
The dissertation is devoted to the the study of the so called “Turnpike Property” in Optimal Control Theory, i.e. we show the convergence of Non-Stationary Optimal Control Problems to the corresponding Stationary one as the time horizon T$\to+\infty$. Actually we prove an exponential convergence far away from the initial point and the terminal point. We analyse both the Finite Dimensional and Infinite Dimensional Linear Quadratic Case with some controllability and observability assumptions. Furthermore, we extend our analysis to a Finite Dimensional NonLinear Convex Case, with controllability and observability assumptions as well.

WE USE COOKIES ON THIS SITE TO ENHANCE USER EXPERIENCE. We also use analytics. By navigating any page you are giving your consent for us to set cookies.    more information